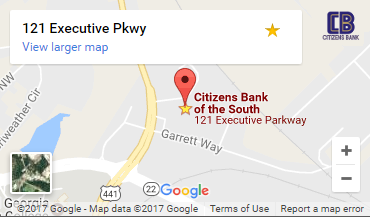 An experienced team of local lenders has been employed to bring a trusted community bank name to Baldwin County. Now open in Milledgeville, Citizens Bank of the South is a full service financial institution that began with a group of Sandersville businessmen and investors over 50 years ago. The former Citizens Bank of Washington and Bulloch Counties consolidated their market names in 2016 for the purposes of communication and distinction.

Citizens Bank of the South (CBOTS) officers and directors recently announced the hiring of William Jones to fill the position of Baldwin County President. Better known as “Bill”, he will also serve as Corporate Vice President for the entire organization bringing over 30 years of industry expertise.

Experienced bankers Barbie Pressas and Jennifer Minshew will join Jones to widen the scope of bank offerings and community outreach. Both women, having attended Georgia College and worked in the Milledgeville area for several decades combined will serve in supporting roles at CBOTS.

Pressas’ extensive background in management makes her an ideal fit for customer service and branch operations. She will carry out the role of Branch Manager as the team moves to full function during the second quarter of this year.

Minshew, the Milledgeville-Baldwin County native and Chamber Ambassador of the Year, will assist Jones in lending and executive duties. She will publicly represent CBOTS in all community endeavors including, but not limited to First Friday, Shop Small, the Deep Roots Festival and other sponsored organizations and events.

Company CEO David Brooker confirms, “We have been excited about Milledgeville since we knew we could partner with Bill and his team of bankers. They’ve already demonstrated success in the industry while supporting community and business with a ‘hands-on’ approach. We are excited about the growth that continues in Milledgeville and look forward to being a part of it.”